BCAA vs Creatine: Creatine vs BCAA Which Is Better

It is often asked which is a better supplement to take out of branched chain amino acids (BCAAs) and creatine. Both are amino acids, but have differences in their structural makeup and training benefits. When analysing "BCAA vs Creatine" it is important to understand the differences between the two. 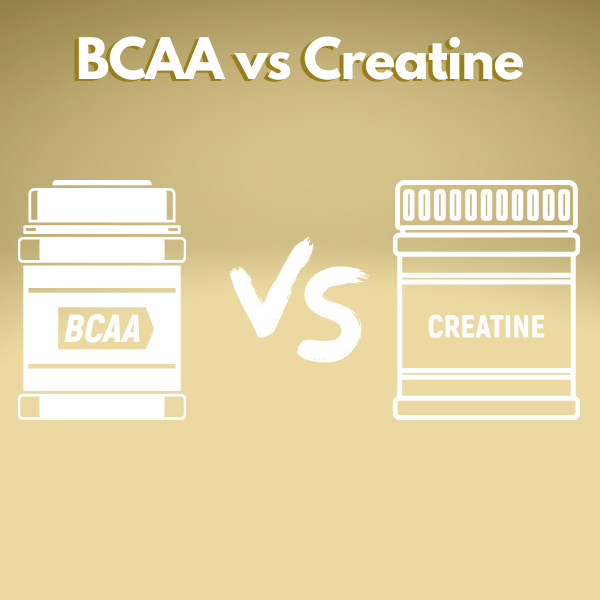 BCAA's consist of the three branched chain amino acids; leucine, isoleucine, and valine. These are 3 of the 9 essential amino acids (EAAs). Creatine is formed by three amino acids arginine, glycine, and methionine. It can be produced by the body naturally.

What Are Amino Acids

What Are BCAA's And How They Work

The BCAAs are: leucine, isoleucine, and valine, and each of these has a different function in the effect they have on training. BCAA's are different from other amino acids as they exist in free form in the supplement and are broken down in the muscles rather than in the liver. This means that they get to work faster in your body. Each of these are EAAs and have a specific role regarding how they work in the body. Let's take a look at the function of each amino acid.

What Does Leucine Do?

Which Foods Have Good Levels Of Leucine

Foods which have good levels of leucine include:

What Does Isoleucine Do?

Isoleucine carries out a range of different roles. It shares some functions with lecuine such as regualting blood glucose and healing wounds. Isoleucine has been shown to reduce plasma glucose levels, which helps regulate blood sugar in the body (2). Isoleucine asisst with the detoxificaton of nitrogenous waste such as ammonia, which is then remove from the body by the kidneys. This amino acid also helps with hemoglobin synthesis, moving oxygen from the lungs to the body's tissues.

Isoleucine, maintains your immune system’s basic functions (3). This plays a critical role in growth, protein metabolism, immunity, fatty acid metabolism, and glucose transportation. Due to the improved functionality, isoleucine can help you lose fat, as shown in studies with mice given the supplement and placebos. Those on isoleucine supplements lost weight faster than those on the placebo (4). Isoleucine has also been found to have a vital role in regulating body weight and muscle protein synthesis (5).

Which Foods Have Good Levels Of Isoleucine

Foods which have good levels of isoleucine include:

What Does Valine Do?

Valine helps to delay fatigue and aids with muscle recovery. It stimulates muscle growth and tissue repair by competing with tryptophan for transportation to the brain, decreasing brain 5-HT synthesis. This means you will be able to push yourself harder, for a longer period in the gym or athletic competition. 5-HT is often referred to as serotonin. Serotonin causes fatigue and, because it is synthesised by tryptophan, fatigue will be delayed when valine is competing with it for transportation to the brain (6).

Which Foods Have Good Levels Of Valine

Foods which have good levels of valine include:

As you can see, all these three essential amino acids can easily be obtained through food sources. For training purposes, though, this may not be practical as you would need to digest these before training. The BCAA supplements are absorbed directly into the bloodstream rather than via digestion.

How Often Should I Take BCAA Supplementation

A study on BCAA supplementation and effective nutrition strategies found a dosage of between four and 20 grams per day is advised for optimal results including combating muscle protein breakdown. It also found using supplements for longer periods while carrying out a strict training plan will increase athletic performance.

Additionally, taking more than 200mg of BCAA supplementation for each kilogram of bodyweight each day over a ten day period was found to be the most effective way to reduce exercise induced muscle damage. This was particularly true when the supplementation was taken pre workout (7).

When Is The Best Time To Take BCAA Supplementation

The study above found pre workout supplementation of branched chain amino acids to be most effective. This is supported by another study which found repeated BCAA supplementation before exercise had a better effect in preventing delayed onset muscle soreness (DOMS) and EIMD when compared to taking repeated supplementation post-workout (8). However, more research is needed to give definitive evidence over the best time to take BCAA supplements.

Do BCAA Supplements Have Any Side-Effects?

In most cases, people will not have any issues when taking BCAA's. However, there are some side effects which could be experienced. This is why it is always advisable to consult with a doctor, qualified dietician or coach before taking any supplements. As they are natural occurring and essential to the body's health, BCAA's aren't considered risky. Still,  digestive issues can potentially be experienced. This includes nausea, bloating, diarrhoea, vomiting, and in some cases, fatigue and loss of concentration.

Due to BCAA's being instrumental in controlling blood sugar, people with diabetes should also consult their doctor before using BCAA's. They are also not recommended for pregnant or breastfeeding women. Now, we have dissected BCAA's, let's move our attention to creatine.

Creatine is also an amino acid termed a 'tripeptide molecule'. This means it comprises of arginine, glycine, and methionine. Unlike BCAA's, creatine is produced by the body and provides enhanced energy during workouts by creating Adenosine Tri-Phosphate (ATP).

Creatine is primarily about providing more energy to work out. Combined with BCAA's it creates a good combination of energy supply, endurance, reduced fatigue, and preventing muscle breakdown. This is why creatine and BCAA's are often used together by people training to increase lean muscle mass. Creatine is not absorbed into the muscles like BCAAs, but stored as creatine phosphate and interacts with adenosine diphosphate (ADP) molecules to produce ATP, an energy source during performance and training.

The Three Main Types Of Creatine

Creatine supplements are available in a number of different variations. Below we focus on the main three:

1.  Has An Excellent Safety Record

4.  Is The Most Affordable Form of Creatine

5.  Is The Most Available Form of Creatine

Creatine ethyl ester (CEE) has been chemically modified by adding an ester group. The reason for this is, the attachment of an ester group to creatine monohydrate allows a greater amount of creatine to be absorbed. The objective of creatine ethyl ester is to make creatine supplementation available in smaller dosages due to CEE being able to more effectively impact cellular function.  The way in which CEE achieves this is from the esterification (attaching the ester group to creatine monohydrate). This results in the creatine ester using fat more efficiently to permeate the cell wall. When it does this creatine is able to have an impact on cellular function.

Whether creatine ethyl ester can achieve the objective of providing the benefits of creatine monohydrate in a smaller dose is still inconclusive. The limited research available is conflicting with some finding the body does better absorb creatine when taken as a creatine ethyl ester supplement (9). And other research has found absorption to be less effective (10).

The biggest excitement around this form of creatine was a study that showed creatine hydrochloride was 38 times more soluble in water than monohydrate (11). This led to speculation that a lower dose could be more effective and reduce potential side effects like digestive issues. There have not been any studies on this in humans, and until real data is produced, the efficiency of HCL will remain speculative.

Other Forms Of Creatine

Other forms of creatine such as creatine nitrate, creatine magnesium chelate, which has a magnesium molecule attached, and Kre-Alklyn, where the creatine is buffered with an alkali like sodium bicarb to make it more alkali and thus mitigate any potential digestive issues, have shown no definitive improvements in performance over monohydrate.

What Does Creatine Do In The Body

When used in training, creatine produces more energy for workouts and increases endurance. Like BCAA's, it also helps with recovery and fatigue, reducing recovery time and promoting muscle growth due to its water-retention properties. Creatine is a good option if you want to bulk up and increase muscle mass as it provides more energy for more reps and HIIT sessions where you are combining exercises. Creatine can also be taken as a pre-workout and is easily combined in shakes or similar blends with protein powder.

Combined with BCAA's as a pre-workout supplement, you get the best of both worlds with protein and energy for extra power and endurance. Aside from the performance aspects, creatine has also been shown to possess antioxidant properties; this helps with anti-aging, reduces mental and physical fatigue, and reduces blood sugar levels (13).

The following food sources are rich in creatine:

Does Creatine Have Side Effects?

In the recommended doses, creatine and indeed any other forms of supplements are safe. However, creatine did raise some concerns regarding the effects it could have on liver and kidney health. Purported claims for liver and kidney damage, bloating, dehydration, muscle cramps, weight gain, and digestive issues have not been supported by research. More authoritative studies conducted view creatine as one of the safest supplements available.

There were even suggestions that creatine was an anabolic steroid. As such is not safe for teenagers or women and should only be used by professional bodybuilders, and athletes have fortunately long been dismissed. One of the concerns regarding cramps and dehydration was voiced because creatine reduces the level of water stored in the body, and dehydration and cramping are often related. To date, no evidence in any research supports these claims, and further studies found that over three years, college athletes that used creatine actually had fewer instances of cramping, muscle injuries, and cramps than those that didn't use creatine (14).

When Should You Take Creatine

There are three opinions on when to take creatine for the best results. There is the 'before workout' camp, the 'after workout' camp, and the 'take it anytime' camp. While there are arguments for all three, you can take it anytime. However, there is a case to be made for taking it before and after on your workout days as the inclusion of creatine before a workout will add more energy, and post-workout will allow for recovery.

If you are eating properly, adding creatine in doses of 3-5 grams per day as an optimum dose will certainly show benefits. While you can 'load' your creatine dose for the first week to increase the cell saturation, taking more beyond that has no additional results.

It is clear that both BCAA's and creatine have a measurable and effective impact on performance, endurance, muscle growth, muscle recovery, prevention of injuries, and other benefits for human health beyond workouts and fitness. Adding creatine to your BCAA pre-workout will have positive results for your training. If you keep to the recommended dosages per the supplier, you should not have any issues and only see good muscle growth and health going forward.