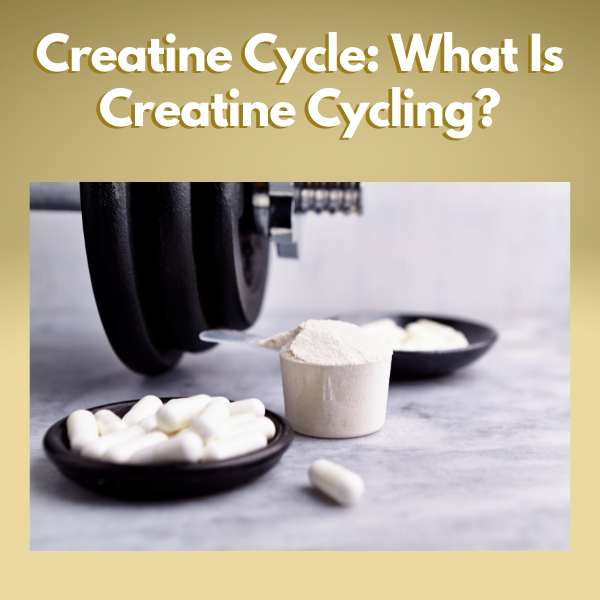 Creatine cycling is a phased approach to using creatine supplements to increase and maintain your muscles’ creatine stores, which aids muscle growth and exercise performance. It consists of loading, maintenance, and time off phases. One cycle will last for about 10 weeks.

So, if you’re considering taking creatine supplements to achieve your exercise and fitness goals, creatine cycling may be the perfect way to realize your goals. Keep reading to learn more about creatine cycles, their benefits, and alternative approaches.

What Is A Creatine Cycle?

One creatine cycle will consist of three phases: the loading phase, the maintenance phase, and the time off phase.

The loading phase consists of consuming high creatine quantities to saturate the muscles. This is a way to maximize creatine stores as fast as possible. It will typically last for about a week. The maintenance phase will last for about seven weeks, where a lower quantity of creatine is ingested to maintain the elevated levels attained in the loading phase. Then, a two-week time off phase will give your body a break from the supplement to restore a natural equilibrium.

Why Is Creatine Supplementation Used?

By maximizing creatine stores, your body will have more adenosine triphosphate (ATP) available during training. ATP is an energy-carrying molecule, and creatine monohydrate allows individuals to train for longer and greater intensities due to the elevation of ATP stores.

ATP is the energy source for use and storage at the cellular level. Its structure is a nucleoside triphosphate consisting of a nitrogenous base (adenine), a ribose sugar, and three serially bonded phosphate.

Colloquially, ATP is referred to as the “energy currency” of the cell. It provides energy ready to release the bond between the second and third phosphate groups (1).

When ingested or created by the body, creatine binds with a phosphate molecule that forms creatine phosphate. ATP provides energy by hydrolyzing a phosphate group. The process leads to a single phosphate being lost from the ATP.

Consequently, the organic compound adenosine diphosphate (ADP) is released. Therefore, the body has free ADP due to ATP hydrolysis.

ADP does not enhance fitness or performance, but in combination with creatine, it does. The creatine donates its phosphate group to free the ADP to re-form ATP (2). The system works through the transference of high-energy phosphate from creatine phosphate to ADP to regenerate ATP.

And increased ATP allows the body to increase the length and intensity of training (1, 2).

How Does A Creatine Cycle Work?

If you want to take a creatine supplement to improve your training performance, the most effective way is through creatine cycling. So, it’s important to learn about what each phase involves and how the process works.

A creatine cycle will usually last between nine and ten weeks, with an eight-week phase of taking supplements, including the one-week loading and the seven-week maintenance phases. The cycle ends with a two-week time off period where you halt your creatine supplementation to ensure optimal effectiveness.

This is what a common creatine cycle looks like:

In literature, this is referred to as the “loading” protocol and is characterized by ingesting 0.3 grams (0.01oz) of creatine monohydrate per kilogram (2.2lbs) per day for five to seven days and 3-5 grams (0.1-0.17oz) per day after that. Research has demonstrated that this protocol leads to a 10%-40% increase in muscle creatine and phosphocreatine (3).

Additional research has reported that the loading phase can even be cut down to as little as 2-3 days if ingested with protein and/or carbohydrates and can still be beneficial. While creatine’s plasma (blood) half-life is around three hours, the research shows that only 46% of ingested creatine will be excreted after 24 hours after a full loading phase, and creatine levels will only drop down to pre-supplementation levels after 30 days (4).

The loading phase intends to increase creatine levels in the muscles until they are fully saturated. This would mean that the body has as much ATP available as possible to perform optimally.

Can Loading With Higher Quantities of Creatine Have Better Results?

No, higher quantities of creatine will not yield better results due to creatine muscle saturation. Research indicates that saturation levels stand at a concentration of 150mmol/kg dry mass concentration (5).

Research also hasn’t been able to find any evidence that an intake of over 20-30g per day for five to six days has any potentiating effect on creatine uptake or performance (5).

And, for individuals with an initial total creatine concentration that was already approaching 150mmol/kg dry mass, there was neither a creatine uptake nor an effect on phosphocreatine resynthesis. And performance levels did not increase for those individuals either (5).

An alternative dosage of 0.25 grams of creatine monohydrate per kilogram of fat-free mass per day has been found to increase muscle creatine stores sufficiently.

These protocols appear to have the same effect on increasing muscle creatine stores, but it takes longer to reach saturation. These cycling protocols involve the consumption of “loading” doses for three to five days every three to four weeks.

If you’re going through creatine cycling, you need to treat the time off phase with equal importance as loading and maintenance. In terms of the research, theoretically, creatine supplementation for more than eight weeks can reduce its effects on the body. Taking time off from supplementation allows the initial benefits to be maintained while not affecting the gains already made. This is due to the muscles’ ability to retain creatine stores for 30 days. The washout period may last longer for some individuals, and muscle creatine may return to baseline levels after more than 30 days (6).

Once the time off phase of one to two weeks has been observed, start the creatine cycle again, beginning with the loading phase. This will allow you to see the same benefits as the original cycle (6).

You should also be supplementing when you’re taking a rest day. The goal of supplementing on rest days would be to retain your muscles’ elevated creatine content. So, stick to the protocol, whether you are working out on the day or not.

What Are The Benefits Of A Creatine Cycle?

So, now that you know about creatine cycling, you’re going to be asking yourself why you want to engage in this supplementation protocol. Creatine monohydrate has been demonstrated to improve performance and gains, but what does that entail. Let’s explore some of the main benefits of a creatine cycle:

The best way to benefit from creatine monohydrate effects is through a creatine loading phase. Research has shown that the loading phase can maximize your muscle creatine stores within a week or even less (3).

With a creatine loading phase, your training sessions will be longer and more intense within as little as a week. And this is important because your exercise routine is what matters and turns creatine supplementation into increased muscle mass, strength, and power (7).

A study into the effect of creatine loading on bench-press performance showed significant increases after a week of loading, with those using the supplementation protocol able to perform more reps in five sets (7).

Following the loading phase that gives you all of these gains, your maintenance phase will allow you to retain these gains over time. Your body will typically use between 1-2% of creatine stores daily. Therefore, a daily maintenance dose of 3-5g will be sufficient to ensure that muscle creatine stores remain saturated and that your exercise performance continues at its optimal level (3).

Full creatine stores allow you to draw water into your muscles, making them bigger. In addition to extra reps, you can also take on heavier sets, and the creatine stores will aid in performance due to its osmotic properties (8).

This means that creatine will draw water into muscle cells, which will lead to a swelling effect. You will also experience a “pump, " making the muscles look fuller (9).

In the long-term, higher creatine stores will enhance muscle protein synthesis (MPS) and could lead to more lean muscle mass (10).

Research has found that creatine can selectively stimulate the rate of MPS for two major contractile proteins, actin and myosin heavy chain, in cultures of differentiating skeletal muscle (10). However, creatine only affects the rate of synthesis, but not the rate of degradation.

Another study found that creatine supplementation in conjunction with resistance training led to greater decreases in serum myostatin (p < 0.05) but didn’t affect GASP-1(p < 0.05). Therefore, the effects of resistance training on serum levels of myostatin and GASP-1 could explain the increased muscle mass that creatine supplementation causes (11).

The gains in bench press 1RM ranged from 3-45%, and weight lifting improvements ranged between 16 and 43% (12). This provides enough evidence to indicate that creatine supplementation with resistance training is more effective at increasing strength and weightlifting performance than without it.

However, the degree to which this affects the body can differ from one individual to the next.

More research into the positive relationship between muscle creatine uptake and improvements to exercise performance (13) found that ingestion of creatine monohydrate at 20g per day for 5-6 days increased the total creatine concentration in skeletal muscle by about 25mmol/kg of dry mass. 30% of this increase came in the form of phosphocreatine (14) .

And losses in ATP during heavy anaerobic exercise declined following creatine ingestion despite increases in work production (14). This suggests that performance improvements are caused by the improvements in ATP resynthesis due to the increased availability of creatine phosphate.

Among 300 studies, 70% reported statistically significant results about the potential ergogenic value of creatine supplementation, while the rest reported non-significant gains.

Are There Alternatives To Creatine Cycling?

Despite the scientific data that supports the reported benefits of creatine cycling, it remains a contentious issue, and there are alternative methods to supplementation.

One study shows that you don’t need to cycle creatine. Because creatine has been studied more than any other supplement, there are no longer questions surrounding the short and long-term effects, which means that there’s no danger presented by not cycling (15).

Furthermore, cycling has yet to be proven as a superior protocol to not cycling. However, when creatine is being used as a supplement for the first time, it has been shown to elevate muscle creatine levels faster than when not taken through a cycling protocol (15).

Therefore, your positive results in terms of gains in mass and improved performance and strength will be observed faster during the initial phases of supplementation but, after 30 days, the results will be similar (15).

What Happens If You Stop Taking Creatine?

Studies have not demonstrated any kind of “down period in the wake of the termination of supplementation protocols. This will result in losses in water weight, but not muscle mass (16).

So, is creatine cycling a good way to gain strength, performance, and muscle mass compared to other supplementation protocols? It is contentious, and there’s no irrefutable scientific evidence to demonstrate which protocol is better. However, if you want to make gains and improvements faster, the benefits of loading are undeniable in this regard.