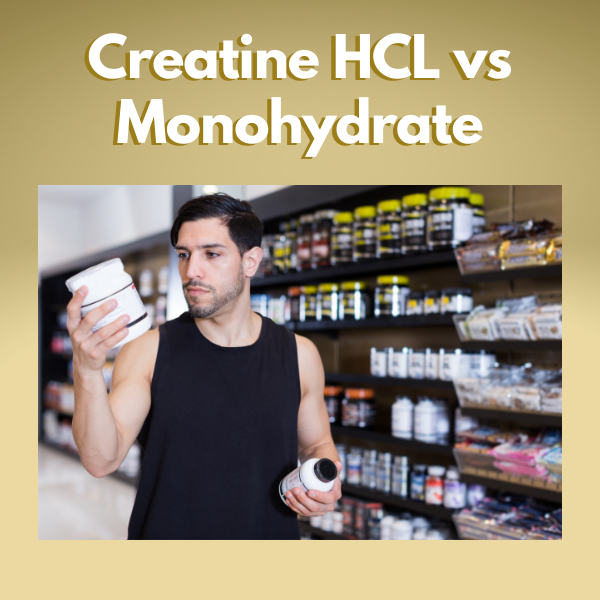 Creatine monohydrate is a creatine molecule attached to a water molecule, while creatine HCL is made by attaching it to a hydrochloride (HCL) group. The HCL group enhances its stability, making it more soluble. But there is a larger body of research to prove the efficacy of creatine monohydrate.

So, while there have been many positive reviews from personal trainers and fitness enthusiasts about creatine HCL's effects on performance, the body of research conducted cannot compete with that of creatine monohydrate.

If you’d like to know where the science stands on the differences between creatine monohydrate and creatine HCL, we have the answers!

What Is Creatine And How Does It Work?

Creatine is an amino acid, also known as a “tripeptide molecule, " comprising arginine, glycine, and methionine. It is found in both creatine monohydrate and creatine HCL. It helps athletes and fitness enthusiasts train for longer and at higher intensities by elevating Adenosine triphosphate (ATP) stores, a.k.a. “Energy currency”.

At the cellular level, ATP is the source of energy for use and storage. It is structured as a nucleoside triphosphate consisting of a nitrogenous base (adenine), ribose sugar, and phosphate groups, which are serially bonded. As the “energy currency” for cells, ATP provides the energy for two of the three phosphate groups (1).

When ingested, creatine binds itself to a phosphate molecule and forms creatine phosphate. ATP hydrolyzes a phosphate group to provide energy. This process results in one phosphate being lost from the ATP, resulting in adenosine diphosphate (ADP) (2).

The body doesn’t necessarily have enhanced fitness or performance levels with the free ADP made available from ATP hydrolysis. However, in combination with creatine, it does. This is known as the ATP-creatine phosphate system. Here high energy phosphate is transferred from creatine phosphate and, when combined with ADP, regenerates ATP (2).

What Is Creatine Monohydrate?

Creatine monohydrate is made up of a creatine molecule attached to a single water molecule. By weight, it is 90% creatine. It is the most popular form of creatine on the market. It has been the most extensively researched creatine supplement, with numerous benefits.

It can be taken continuously or on a “creatine cycle”, which yields faster results.

Creatine monohydrate is currently regarded as the most popular nutritional supplement on the market and has been used by athletes and fitness enthusiasts for decades. Furthermore, there is a massive collection of research available that has been used to verify the benefits that those who promote its efficacy have made.

What Is Creatine Hydrochloride?

On the other hand, Creatine hydrochloride is created by attaching creatine to a hydrochloride group. This form of creatine has much higher aqueous solubility, meaning that it mixes better with liquid, making it easier for the body to absorb and retain than creatine monohydrate.

Therefore, creatine HCL supplementation is broken down faster and absorbed into the muscles more efficiently. This faster absorption rate reduces the probability of creatine monohydrate's most common side effect: water retention.

What Is The Theory Behind Creatine HCL?

Creatine HCL was developed to allow it to mix better with liquids, enhance absorption, and eliminate water retention and gastrointestinal issues – the two most common complaints with creatine monohydrate.

Attaching the HCL group to creatine molecules results in a lower ph level in the creatine supplement, making it more acidic. Higher acidity means that the supplement is more soluble in liquids and a lot less liquid remains in the intestines after ingestion.

When left in the intestines, creatine draws in water, increasing the possibility of subcutaneous water retention and gastrointestinal distress. Therefore, creatine HCL supplementation will greatly reduce stomach aches and diarrhea.

Furthermore, the better absorption rate allows you to ingest smaller doses of creatine HCL than what’s required for creatine monohydrate.

Unlike creatine monohydrate, creatine HCL has been available on the market for a far shorter time. Therefore, there is substantially less research available, and any claims made about its benefits will largely be related to studies on monohydrate and should not be considered scientific fact.

How Is Creatine HCL Different From Creatine Monohydrate?

Creatine comprises three different amino acids: arginine, glycine, and methionine. When the creatine HCL molecule is attached to a hydrochloride group, it differs from creatine monohydrate (attached to a single water molecule) in terms of being more acidic and more soluble, making it easier to mix with fluids and absorb.

Research has demonstrated that creatine HCL can be absorbed by the intestines at a rate 38 times higher than creatine monohydrate, with 60% more creatine being absorbed.

Creatine HCL hasn’t been studied as extensively as creatine monohydrate, but it is reasonable to assume they yield the same benefits because both consist of creatine molecules.

The only difference is that one is attached to a hydrochloride group and the other to a water molecule. The attachment to an HCL group improves absorption while reducing water retention and gastrointestinal side effects.

So, with these differences in mind, let’s compare the merits and shortcomings of creatine HCL and creatine monohydrate by exploring the available scientific literature:

One research analysis confirmed the claims made in the patent by studying the aqueous solubility of creatine derivatives. It found that creatine HCL was 38 times more soluble than creatine monohydrate (4).

An additional study found that creatine placed in a highly acidic state stabilized at a ph level of 1.0. The creatine absorbed by the intestines increased by 60% due to enhanced solubility and increased permeability under these conditions (5).

This suggests that creatine HCL can improve oral absorption compared to creatine alone.

Both creatine monohydrate and creatine HCL are considered safe. Still, early research has suggested that creatine HCL will have fewer adverse side effects due to its higher solubility and intestinal absorption (6).

Because creatine HCL is absorbed 38 times faster than creatine monohydrate and the body absorbs 60% more creatine, less creatine needs to be taken, reducing gastrointestinal issues commonly associated with creatine monohydrate. However, the risk of diarrhea may be increased if the intake in a single serving is above ten grams (6).

In terms of the extremely positive feedback that creatine HCL has received from fitness experts and the research demonstrating better absorption, the performance benefits have been demonstrated on an anecdotal basis.

However, the limited research available means that we cannot make such claims with absolute certainty. Creatine monohydrate has been researched extensively and is a proven supplement with many demonstrable benefits for athletes and fitness enthusiasts.

However, some research has demonstrated that there have been significant gains in fat-free mass for trainees using creatine HCL supplements compared to subjects that are using creatine monohydrate supplements.

More research comparing the two supplements is still required. However, research has also found that while creatine HCL and creatine monohydrate improve performance, changes to body composition in recreational weight lifters were only observed for those supplementing with creatine HCL (8).

1RM leg press significantly increased in all subjects, and the studies did not find differences between the groups. Both groups also experienced decreases in fat and gains in fat-free muscle mass, but the levels were more significant in the creatine HCL group.

Further research confirmed the hypothesis by demonstrating that 20mg of creatine supplementation per day for five days improved exercise performance during repetitive isokinetic knee-extensor training exercises, decreasing fatigue by as much as 6% (9).

Creatine supplementation has also been found to amplify resistance training and enhance strength and muscle hypertrophy (11).

Furthermore, creatine is more effective at improving lean body mass and anaerobic capacity than any other supplement on the market (12). With several hundred peer-reviewed research papers studying the supplement and almost 70% of them reporting significant improvements in exercise capacity, you cannot question its benefits. The studies that did not report significant improvements mostly report non-significant gains.

It was also found that both creatine groups could yield significant decreases in body fat when taken in conjunction with regular exercise (8). However, fat-free mass only yielded a significant increase among subjects in the creatine HCL group.

Research also demonstrated that short-term creatine supplementation led to improvements in maximal power or strength by 5-15%, while the work performed during sets of maximal effort muscle contractions yielded improvements of between 5-15% as well (13).

Creatine in any form that you choose to supplement your diet and exercise routine will undoubtedly yield incredible benefits for your training performance. There is an enormous body of research available to prove the effectiveness of creatine monohydrate – but as a much older and more established supplement, this is to be expected.

The fundamental basis for creatine HCL’s creation, which is to improve stability, solubility, and absorption, presents athletes and fitness enthusiasts with an opportunity to yield all of the benefits of creatine monohydrate without the less desirable, adverse side-effects.

In addition to this, the fitness community has provided plenty of positive feedback on creatine HCL to indicate that the improved absorption could yield even better results than creatine monohydrate. However, it is important to note that creatine HCL hasn’t been researched as extensively as creatine monohydrate. Therefore, it is irresponsible to accept any claims made by those who promote it as scientific fact.

More research on the effects, benefits, and safety of creatine HCL is required. You should consult with a medical professional before adopting the supplement to reach your fitness goals.