Does Creatine Make You Bloated?

Many bodybuilders and athletes turn to creatine in the quest to run faster, lift heavier weights, and outperform the competition. Unfortunately, despite the hundreds of safety tests, some users experience bloating when they start taking this supplement. So does creatine really make you bloated? 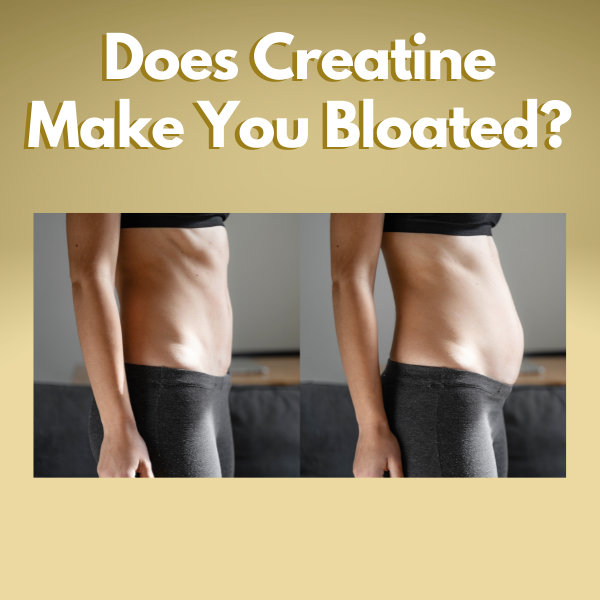 Many bodybuilders and athletes turn to creatine in the quest to run faster, lift heavier weights, and outperform the competition. Creatine enhances muscle mass while giving you bursts of energy and strength. Unfortunately, despite the hundreds of safety tests, some users tend to experience bloating during the beginning stages of supplementation. So does creatine really make you bloated?

Creatine can cause bloating, especially in the 'loading phase.' Creatine has a "super-hydration" effect on the body, increasing water retention and forcing excess fluid into the muscle cells, making them appear fuller, soft, and bloated. So skip the loading phase to reduce bloating.

Creatine is a natural compound that occurs in your skeletal muscle. After consuming protein, your body naturally makes creatine through your liver and kidneys. It is naturally synthesized in your body from a tri-peptide molecule consisting of three amino acids - arginine, glycine, and methionine - essential for bodily functions (1).

The structure of ATP is essentially a nucleoside triphosphate, consisting of adenine (a nitrogenous base), a ribose sugar, and three serially bonded phosphate groups. In addition, ATP provides ready and fast-releasing energy in the second and third phosphate groups (3).

Your body uses ATP to power fast-twitching muscle contraction movements. But your body stores limited quantities of ATP in the muscle cells, which quickly depletes during high-intensity workouts, typically after three seconds (4). So, the swift reproduction of ATP is essential to prevent muscle burnout and fatigue.

Creatine binds with a phosphate molecule in the body, forming creatine phosphate. The phosphocreatine, a high-energy compound, assists in rapidly regenerating ATP by "lending" an immediate phosphate supply to reform ATP. So, phosphocreatine is a temporary buffer that helps maintain ATP production (5).

There are various creatine supplement forms, including creatine monohydrate, creatine ethyl ester, Kre-alkaline, creatine hydrochloride (HCL), liquid creatine, etc. The primary difference between these creatine sources is the type of molecule they are bound to; for example, creatine HCL is attached to the hydrochloride.

Does Creatine Make You Bloated?

Creatine bloating is a phenomenon mostly occurring during the 'loading phase' - when you start to supplement with creatine.

Creatine loading may result in significant weight gain due to increased muscle mass and water intake into the muscles. While harmless, this rapid increase in body weight and water retention can cause bloating symptoms.

Creatine's chemical properties cause it to carry large amounts of water -  a 'hydration shell' - around with it. Therefore, increasing creatine levels will increase the water volume in your muscles, temporarily increasing the size too.

One study showed that consuming creatine supplements for 28 days, including the loading phase, increased the participants' body weights by 2.9 pounds on average. The weight gain accounted for muscle growth and water retention (7).

Then, no significant changes were noted in body fat percentage or daily caloric intake in the creatine or placebo group. The findings support that creatine supplementation can increase total body weight. In addition, the weight gain in place of creatine supplements can partially be due to water retention. However, it appears that adverse bloating effects primarily occur in the early stages (9).

Methodologies differ regarding following a "loading" phase when taking creatine supplementation. The primary benefit of the loading phase is to reach your peak creatine storage levels in the muscle as quickly as possible.

Many trainers believe it's necessary to undergo a creatine loading phase to enhance and maximize your muscle stores rapidly. However, others recommend starting on a specific dosage and sticking to that amount throughout the supplementation.

The loading phase works as follows: during the first 5 to 7 days, you'll have to consume a significant amount of creatine in a short span to saturate your muscle storage rapidly. Afterward, you reduce dosages to 5 grams daily - the 'maintenance phase.' The maintenance phase ensures that your creatine stores remain saturated.

For example, trainers commonly recommend taking up to 20 grams of creatine in four 5-gram servings per day for 5 to 7 days. In comparison, the average dosage requirement for creatine is 2 to 5 grams (10).

Research shows that following this regimen can effectively boost your creatine stores by 10 to 40% (11).

A loading phase will make the creatine supplement more effective from the get-go. This is because the loading supersaturates your muscle creatine stores. You could skip loading, but it will take longer to reap creatine's maximum effectiveness (12).

However, other studies show that 3 to 5 grams dosages without the loading phase show a similar creatine storage increase after 28 days (12). So, while the initial loading phase helps to increase creatine stores faster, the difference to a regular dose is negligible after one month.

In addition, creatine is an osmotically active substance. Your skeletal muscle has limited storage capacity for creatine. So, the excess creatine that your muscles fail to absorb sticks around in the body until the kidneys remove it via urination. Before excretion, the additional creatine causes water retention and bloating (7, 13).

Whether you should follow a loading phase or not is entirely up to you. Loading can allow you to reap the benefits faster, but there won't be a significant difference after four weeks. So, unless you have a race or upcoming competition, we recommend taking it slow in the long run as it will help ward off horrible gastrointestinal side effects and bloating.

What To Do If You Gain Weight From Creatine Supplements?

• Creatine supplementation causing weight gain can be muscle or fat gain due to a calorie surplus or temporary water retention. Usually, it's the latter.

• You can reduce fat weight gain by maintaining a calorie deficit. More so, control weight gain from water retention by using the following tips:

• Reduce your carb intake: While you may need to consume carbs for energy, they also cause your body to retain water, so you'll want to lay low on the carbs. Try to limit your daily carb intake to 225 and 325 grams (14).

• Increase your water intake: Drinking lots of water will stimulate urination, which then helps remove the excess water from your body.

• Limit your sodium intake: Excess sodium can cause your body to retain excess fluid. So, eating larger amounts of fresh fruits and veggies and limiting high-sodium, processed foods or fast food will help control weight gain from water retention. Try to limit your sodium intake to a maximum of 2,300 milligrams per day (15).

• Patiently wait for your body to adapt: Exercise gradually reduces water retention. The effects of water retention typically reduce after several weeks of finishing the loading phase. In addition, the more you consistently work out and train, the less water you'll retain.

Do Different Types Of Creatine Cause Less Bloating?

What Is Creatine Monohydrate?

Many creatine types are promising supplements that offer similar benefits to creatine monohydrate but better absorption qualities. Improved absorption means you'll require a lower dosage that may reduce the possibility of bloating.

However, additional research is essential to determine whether these creatine forms can be superior to creatine monohydrates.

Other promising creatine supplements include the following:

Creatine hydrochloride (HCL) is relatively new to the supplement world of creatine. Creatine HCL is made by attaching a hydrochloride group to a creatine molecule to enhance its stability and make it more acidic.

The excitement about creatine HCL supplement is due to its superior aqueous solubility and the intention of better absorption while retaining the same benefits as creatine monohydrate. In addition, attaching a hydrochloride group instead of a water molecule will significantly enhance the water solubility and absorption rate (18).

When supplemented with creatine HCL, the creatine breaks down quickly and absorbs into the muscles faster than creatine monohydrate. You'll notice that creatine HCL almost immediately dissolves in water.

A study discovered that creatine HCL could be up to 38 times more soluble than creatine monohydrate (19). Further research showed that the high acidity of creatine HCL increases absorption by 60% as it increases permeability and enhances solubility (20).

Creatine ethyl ester is a creatine monohydrate molecule enriched with an ester - an organic compound formed through esterification.

Esterification is the reaction of binding alcohol and an organic compound (carboxylic acid) to form an ester and water. The primary objective of attaching an ester to creatine is to increase absorption while eliminating the common side effects of bloating that some users experience during the loading phase of creatine monohydrate (22).

Micronized creatine is a creatine monohydrate divided into tiny particles up to twenty times smaller than its standard counterpart.

The Benefits Of Creatine Supplementation

Creatine supplementation has a reputation as one of the world's very best legal and natural supplements for strength and muscle gain, and it is well-earned!

Here are the benefits regarding creatine supplements:

An increase in ATP production is the primary benefit of creatine supplementation; you'll notice that the other benefits are ripple effects of the ATP energy increase.

Most of your body's creatine pool lies in your skeletal muscles, with approximately 65% being in a phosphorylated form of creatine (24). So, consuming creatine will naturally increase the muscles' phosphocreatine stores, which play a pivotal role in forming ATP energy production by borrowing phosphates when necessary (25).

Increased ATP levels from creatine ingestion allow you to maintain the muscle peak for longer due to increased phosphocreatine availability (26). More so, it amplifies the effects of resistance training, improves lean body mass and better anaerobic capacity (16).

Research confirms that ingesting 20 grams of creatine for five days can improve exercise performance and reduce fatigue by 6% (27).

Creatine is part of a contraction end product unique to muscle; it plays a vital role in controlling and selectively stimulating the synthesis rate of contractile muscle proteins (28).

Creatine selectively stimulates the synthesis of actin and myosin heavy chain - two major contractile proteins - in cultures of differentiating skeletal muscles. However, creatine will only affect the rate of synthesis, not degradation (28).

Creatine supplementation increases the aerobic breakdown of glucose and reduces lactic acid production. While creatine does not specifically alter your glucose metabolism, it activates AMP-activated protein kinase (AMPK), a sensor of low ATP levels and a master of metabolism regulation. In response, the AMPK shifts your basal glucose metabolism towards oxidation and reduces lactate production in your skeletal muscle cells (29).

Lactic acid accumulation in muscles is a significant reason for muscle fatigue and failure. Therefore, creatine supplements also enhance energy production in working muscles. A study on cyclers shows that creatine supplementation can decrease lactate while raising their lactate threshold. (30).

Creatine can cause bloating and gastrointestinal issues, especially In the loading phase, Fortunately, you can manage this problem by reducing the dosage. Additionally, creatine derivatives like creatine HCL can help avoid these drawbacks. However, more research is needed, especially in direct comparison with creatine monohydrates.