Does Creatine Make You Gain Weight?

Creatine has helped countless people reach their sporting and fitness goals. However, there is some mystery relating to the role this supplement has in weight gain. The question "does creatine make you gain weight?" is often asked. Here we will look at the scientific literature regarding creatine and weight increases. 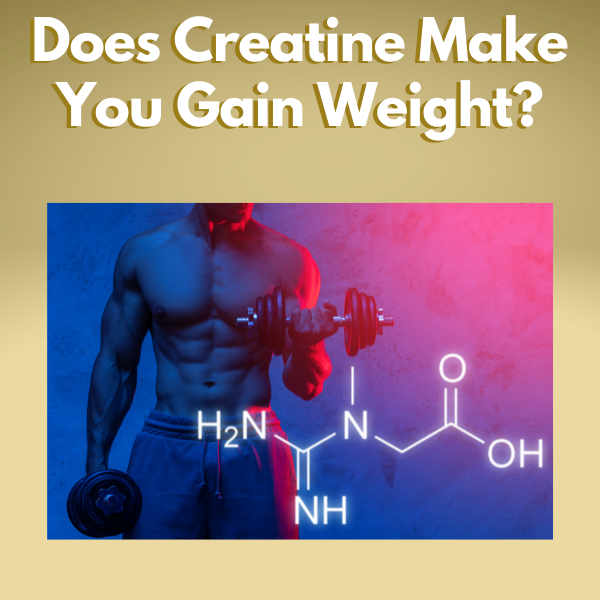 Taking creatine supplements can assist in gaining muscle weight gain over a period of time. The creatine itself does not cause the growth of lean muscle tissue but it helps increase total training volume which make increased muscle growth possible over a period of time. However, when taking creatine for the first time, any weight gain observed in the first 5-7 days will be caused because of water retention. Creatine will not cause individuals to gain fat.

Read on to learn how creatine can affect weight gain...

Can Creatine Make You Gain Weight?

There are 3 ways in which you can increase your weight. By increasing lean muscle tissue, by retaining more water and by increasing your body-fat levels.  As creatine is one of the most researched supplements in the world there is a wealth of scientific literature and this includes research into these 3 areas which can influence weight gain.

Taking creatine causes an increase in muscle creatine stores, body mass, and total body water. Fluid distribution, however, does not change (1). Creatine is an osmotically active substance which means increases in water content should result in increased water retention and consequently increased body mass. Weight gains as high as 5 kgs have been observed, 90% of this weight gain could be attributed to increased water retention (1).

95% of creatine is stored intramuscularly, this means water weight gain is likely to be stored intramuscularly due to the direct influx of water into the muscle cells (1). This increased water retention has accounted for up to 55.4% of increases in total boy water volume in individuals using creatine (1, 2). Research has found that no changes have been observed in body fat percentage or caloric intake in subjects who took creatine compared to a placebo group (2). This supports the claim creatine increases total body water without increasing body fat.

Despite this, the most common side effect of creatine observed is increased water retention in the first few days of supplementation; a significant (0.75kg) increase in body mass was observed after a week (3, 4).

One study found creatine use combined with regular resistance exercise increases body weight and muscular strength whilst decreasing body fat percentage (5). Trained futsal players were found to increase their fat-free mass by 2.56 kg with a 1.78 kg increase in lean muscle after taking creatine.

In another study creatine supplementation combined with resistance training resulted in an amplification in maximum strength and hypertrophy. At least 40% of the strength improvements could be attributed to the increased muscle mass (6). Individuals taking a supplement containing creatine benefited from greater increases in lean body mass, muscle size, and contractile protein compared to subjects taking a supplement without creatine (6).

Additional research has found, the possibility of an increase in total creatine phosphate storage as a result of taking a creatine supplement, might directly or indirectly stimulate the production of muscle IGF-I and muscle protein synthesis. This would result in increased muscle hypertrophy.

It has been found resistance training increased intramuscular insulin-like growth factor-I content by 67%, with greater accumulation from creatine than the placebo. These results were the same regardless of dietary choices (7). It has also been observed creatine combined with weight training in young men resulted in increased muscle mass particularly in the upper limbs (8).

Can Creatine Make You Fat?

There is no evidence to support creatine causing individuals to gain fat. Gains in body fat require a caloric surplus and a 5 g dosage of creatine supplements contains no calories. Creatine has been found to have no effect on mean body fat or calorific intake, just an increase in total body water. To avoid gaining body fat, you should follow a healthy diet and regular exercise (9).

There is some research which suggest creatine combined with resistance training may even help with weight loss. The subjects in this study were found to improve their lean tissue mass. However, more research is required to support this claim (10).

What To Do If You Gain Weight After Creatine Supplementation

Weight gain from creatine supplementation can be due to muscle gain, fat gain or water retention. Weight gain from muscle or fat gain can be reduced by maintaining a calorie deficit. With creatine weight gain from water you may need to wait for your body to adapt, during the loading phase you will gain more water in the first week. Research found 0.75 kg increases in weight during the first week of supplementation (11). A further study found total body water to increase by 9.11 liters over a 4 week period as a result of taking creatine monohydrate (12).

However, the effects of water retention will decrease to insignificant levels within a few weeks of the loading phase (13). Reduced sodium intake can also help avoid weight gain due to its propensity to cause an increase in body fluid retention. It is recommended to reduce your sodium intake to less than 2,300mg per day (14). The most effective method for avoiding water weight gain is by reducing your carbohydrate intake to between 45% and 65% of your daily calories. The reason for this is carbohydrates can retain water (15). Drinking more water also stimulates urination, which can help flush excess water out of your body (15).

The Benefits Of Creatine

Creatine is a leading dietary supplement regularly used by athletes, bodybuilders and fitness enthusiasts to improve muscular strength, athletic performance and to build more muscle. It has been proven to provide several benefits which are detailed below.

The aim of creatine is to increase muscle creatine stores so more adenosine triphosphate (ATP) energy is available. Creatine is synthesized from 3 types of amino acid; arginine, glycine and methionine. It is primarily contained in skeletal muscle, with approximately 65% of it coming in a phosphorylated form as creatine phosphate (phosphocreatine) (16). Creatine phosphate aids with muscle contraction and relaxation during high-intensity exercise. It can anaerobically donate a phosphate group to ADP to form ATP during the first 5 to 8 seconds of a maximal muscular effort. Muscle function depends critically on ATP availability. And this extra ATP provides the muscles with extra energy during exercise.

These increased muscle creatine stores are the benefit of taking a supplement such as creatine monohydrate. This is because the ATP concentration of skeletal muscle amounts to approximately 24 mmol/kg dry mass. This means during maximal exercise the store of skeletal muscle ATP would be exhausted within 1–2 seconds of contraction if there is no of resynthesizing ATP at an equally rapid rate.

Further studies found 20 grams (0.7oz) of creatine per day for 5 days improved performance during exercise, with fatigue-reducing by 6% (17). ATP synthesis was also enhanced during 10-second maximal handgrip exercises (17). This highlights phosphocreatine availability as critical for the re-synthesis of ATP and high-intensity performance (18).

Creatine has been found to stimulate muscle protein synthesis due to the synthesis of contractile proteins, actin, and myosin heavy chain in differing muscle groups. However, it does not affect muscle degradation (20). In this study compounds structurally related to creatine were tested for their effectiveness in substituting for creatine in stimulating contractile protein synthesis. It was found the amino acids arginine and glycine from which creatine is synthesised were unable to replicate these results. The same was true for creatinine.

Creatine has been found to decrease lactic acid. It tends to increase individuals lactic acid threshold. This can potentially improve the performance of endurance athletes. (21).

Creatine has been found to improve power and strength. This has made it a popular supplement to include in any sports nutrition plan. Some of the results found with short term creatine use were as follows; maximal power/strength increased by 5-15%, single-effort sprint performance improved by 1-5%, and work performed during repetitive sprints improved by 5-15%. Creatine used during training has been reported to significantly improve gains in muscle strength and the performance of high intensity exercise (20, 21). 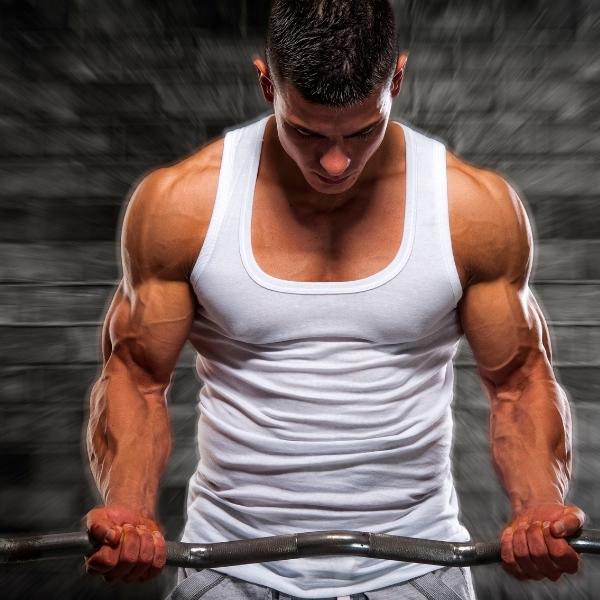 How To Take Creatine

Scientific literature suggests taking creatine should be split into two phases: the loading phase of 0.3 grams of creatine per kilogram of bodyweight per day for 5-7 days. With a maintenance phase of 3-5 grams (per day). This combination of dosages led to an increase of creatine and phosphocreatine muscle stores by 10-40%. However, some researchers believe using a loading phase is unnecessary (22).

Research has recommended the following 2 dosage procedures if no loading phase is used:

It is recommended to take creatine on rest days to keep creatine levels optimal (24). Creatine monohydrate is currently the supplement with the most research confirming its ability to safely gain muscle mass and improve athletic performance (22). For this reason it is often used as a supplement in fitness and sports nutrition. 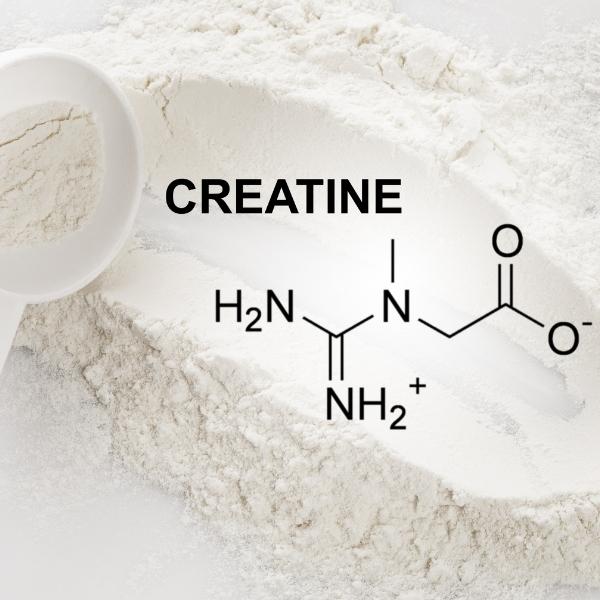