There are 9 essential amino acids (EAA's), three of which are the BCAA's: leucine, valine, and isoleucine. EAA's are known to be important for muscle protein metabolism, with the 3 BCAA's being particularly important. 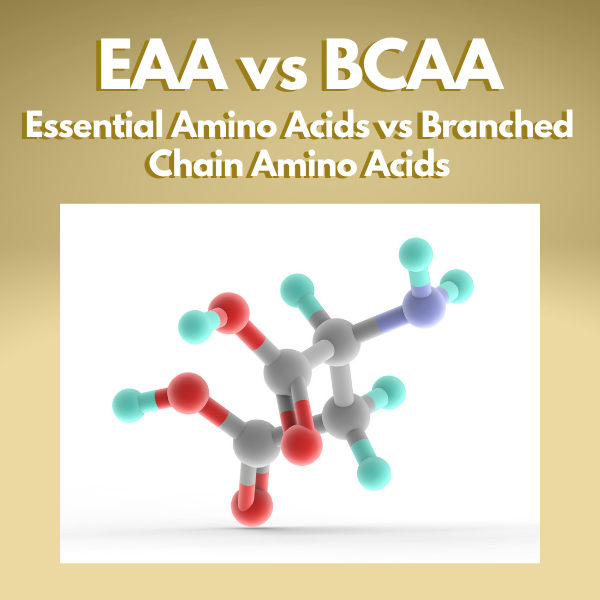 What Are Essential And Branched-Chain Amino Acids?

Amino acids are organic compounds that are fundamental to the healthy physiological functioning of living organisms. They are crucially important for facilitating protein and thus play a central role in the growth and maintenance of muscle tissue in mammals.

The nine essential amino acids are:

Leucine, isoleucine, and valine form a sub-set of these essential amino acids called branched-chain amino acids (BCAAs). The name refers to the molecular structure of this group of amino acids. BCAA molecules have a peripheral component (known as a ‘side chain’) that has a central carbon atom linked to three or more carbon atoms (technically referred to as a ‘branch’).

The BCAAs valine, isoleucine, and leucine are considered paramount for muscle growth and exercise recovery.

The table below indicates the recommended daily intake of essential amino acids.

In the following section, we will look more closely at essential amino acids and BCAAs. We will also assess the potential benefits of taking BCAAs for increased muscle growth and improved recovery from exercise-induced muscle stress.

A Closer Look At The Essential Amino Acids

Essential amino acids are organic compounds composed of carbon, nitrogen, hydrogen, and oxygen. They are the building blocks of protein, which provides the basis for the structure and functioning of all living cells.

There are 21 standard or universal essential amino acids required by every type of living organism. These particular amino acids cannot be synthesized in sufficient amounts to sustain protein metabolism. Essential amino acids, therefore, need to be obtained through dietary sources.

As noted earlier, the primary role of essential amino acids is to facilitate protein metabolism. Essential amino acids act as chemical precursors for protein synthesis, and they are involved in the breakdown (proteolysis) of protein. They also function as precursors to neurotransmitters such as serotonin, which is crucial for healthy brain function and mood regulation.

Furthermore, these compounds play a critically important role in biochemical signaling exchanges between and within cells. Essential amino acids are also vital for maintaining gut health and for supporting a resilient immune system.

A Closer Look At The Branched-Chain Amino Acids

Leucine plays a central role in muscle growth. It acts as a precursor for the synthesis of muscle protein. Leucine also regulates the process of protein synthesis itself by controlling the cell signaling pathways involved in the growth of muscle tissue.

In addition, BCAAs reduce the breakdown of muscle protein. They are also known to contribute towards decreases in exercise-induced muscle pain and fatigue.

Foods that are high in BCAAs include the following:

Due to their role in muscle growth and exercise recovery, BCAAs are receiving increasing attention in the sports and fitness world. It is becoming increasingly common for athletes, bodybuilders, and fitness enthusiasts to take supplements containing leucine, isoleucine, and valine.

This trend raises the question: are there any possible benefits to consuming the three BCAAs separately from the other six essential amino acids?

Enhanced muscle growth is perhaps the most common reason for the popularity of BCAA supplements in the sports and fitness arena. This practice makes sense when considering the importance of leucine, isoleucine, and valine for muscle protein production.

Indeed, studies have shown that BCAAs contribute to increased muscle protein synthesis after exercise. In one clinical study, people who consumed BCAAs before exercising increased their level of muscle protein production by an average of 22%.

The outcome of this study indicates that there are considerable benefits to taking BCAAs to promote enhanced muscle protein synthesis (2). However, other studies show that consuming all nine essential amino acids is likely to be even more beneficial than consuming BCAAs on their own.

Research into the effects of complete protein sources showed dramatic benefits for post-exercise muscle protein synthesis. In one clinical study, participants who consumed 20g of whey protein powder before exercising experienced an average increase in muscle growth of 49%. Participants who consumed 40g experienced an average increase of 56% in their rate of muscle growth.

Consuming BCAAs can, therefore, be effective for increasing muscle growth after exercising. Nevertheless, the consumption of BCAAs together with the other six essential amino acids might be the most effective strategy for achieving enhanced muscle protein synthesis.

Athletes, bodybuilders, and anyone seeking to build more muscle can benefit from using BCAAs supplements. However, they are likely to obtain superior benefits from a complete protein such as whey or soy protein powder containing all nine essential amino acids, including the three BCAAs.

BCAAs are also commonly used to slow or reduce the breakdown or proteolysis of muscle protein. When the rate of protein synthesis is lower than the rate of protein breakdown, muscles begin to decrease in size. This process is known as muscle wasting and can result from intensive exercise, serious illness, aging, and fasting.

The efficacy of BCAAs in reducing muscle wasting is attributable to their role in the facilitation of protein synthesis. BCAAs are also known to play a primary role in decreasing or inhibiting the process of proteolysis.

Leucine, for instance, is not only crucial for protein synthesis but has also been shown to reduce the rate of muscle protein breakdown. Higher rates of leucine production are directly linked to lower rates of proteolysis. Indeed, measuring leucine production is one of the main ways clinical researchers determine the rate of proteolysis in muscle tissue.

The efficacy of BCAAs for reducing protein breakdown and muscle wasting is thus relatively well-substantiated by scientific research. For this reason, BCAAs are used widely by individuals seeking to develop and maintain healthy muscle mass for athletic, aesthetic, or health purposes.

DOMS is commonly experienced after intensive exercise when muscles undergo high levels of physical stress. Though a poorly studied phenomenon, DOMS is thought to be the consequence of micro-tears in the muscle tissue.

Clinical studies suggest that the consumption of BCAAs can reduce the severity and duration of DOMS. The precise role of BCCAs in this regard is, however, still unclear.

The reason why leucine, isoleucine, and valine mitigate the effects of DOMS is probably related to their role in decreasing the rate of proteolysis (protein breakdown). Indeed, clinical research has shown that BCAAs result in decreased post-exercise creatine kinase levels, which indicate reduced muscle breakdown rates.

A review of clinical research into amino acids concluded that the consumption of BCAAs does reduce muscle damage and soreness. The research review highlighted that BCAAs were most effective when:

• Taken in relatively high doses of 200 mg and above.

• Muscle soreness or damage is mild to moderate.

So, BCAAs supplementation does appear to be effective for mitigating the effects of DOMS, even if their role in this regard is still poorly understood.

Many athletes and people who engage in regular, intensive exercise take BCAAs to decrease fatigue. In this case, the benefits of BCAAs have less to do with protein metabolism and more to do with neurotransmitters, specifically serotonin.

During exercise, muscles use and deplete the supply of BCAAs present in the muscle tissue. The depletion of BCAAs in muscle tissues initiates a cascade of biochemical changes, beginning with a decrease of BCAA levels in the blood. In turn, this results in increased levels of tryptophan in the brain.

Tryptophan is an essential amino acid that is the precursor for the neurotransmitter serotonin. As tryptophan levels rise during exercise, so also do the levels of serotonin. This is important because an increase in serotonin levels in the brain is strongly associated with the onset of fatigue during exercise.

By inhibiting the increase of serotonin levels in the brain and thereby reducing the experience of fatigue during exercise, BCAAs can also contribute to greater mental clarity during exercise. However, while the use of BCAAs is effective for reducing fatigue and sustaining mental concentration, there is no evidence that BCAAs enhance performance levels during exercise.

Essential amino acids are crucial for protein metabolism and are thus critical for healthy muscle growth and maintenance. The BCAAs, isoleucine, leucine, and valine, are essential amino acids that are of central importance in the synthesis and breakdown of muscle protein.

BCAA supplements are used widely in the sport and fitness world due to their association with improved muscle growth and reduced muscle soreness and fatigue after exercise.

There are well-substantiated benefits to consuming BCAA supplements on their own for specific purposes. BCAAs are effective for reducing muscle breakdown, muscle soreness, and fatigue after exercising.

The consumption of BCAAs has also been shown to enhance muscle protein synthesis and thus muscle growth. However, consuming complete proteins with all nine essential amino acids, such as whey protein powder, is probably more effective for muscle growth than consuming BCAAs alone.