Pros and Cons Of Creatine

In the pursuit of improved performance many athletes and bodybuilders turn to various performance-enhancing supplements. Creatine ranks amongst the most popular of these supplements, improving muscle mass, strength, and endurance. However, despite the numerous benefits there are some cons associated with creatine. 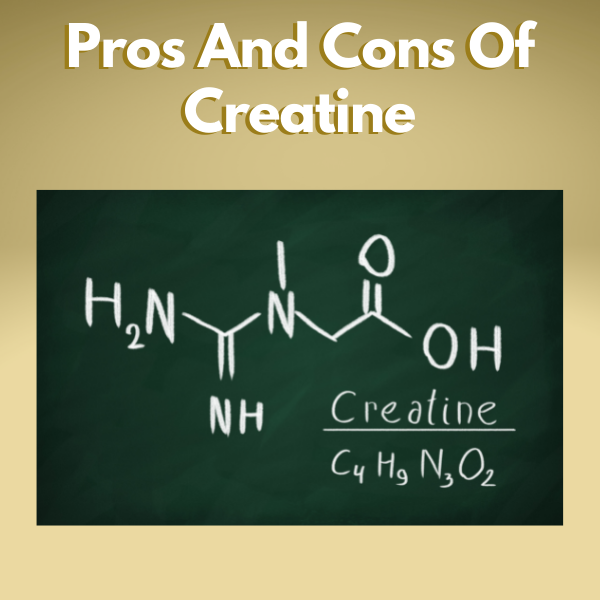 Whether you are pumping bars or trying to run the extra mile, your body needs fuel to keep your muscles up and running correctly. So, if you're considering adding creatine to your supplement regime, here is the full scope of the benefits and potential drawbacks of creatine supplements.

What Does Creatine Do?

After consuming protein, your body can naturally make creatine through your liver and kidneys. Creatine is essentially a tri-peptide molecule consisting of a combination of arginine, glycine, and methionine amino acids (1).

Creatine ultimately serves to increase the body's ability to produce more energy. It is a fundamental fuel source for fast-twitching muscle contractions during heavy lifting and high-intensity exercises.

The mechanism is pretty straightforward: If you have sufficient energy to run longer or lift heavier weights in the gym, your body creates additional tiny muscle microtears. Your body will naturally repair the tears, giving your more prominent and stronger muscles in the long run (2).

Creatine plays an essential role in creating adenosine triphosphate (ATP) - the "energy currency" of your cells (3).

Your body uses this vital energy source to power contraction movements in working muscles. However, ATP is stored in limited quantities in the muscle cells and quickly depletes during high-intensity workouts - generally only to last around three seconds (4).

Your body needs to generate ATP at a rate complementary to the ATP demand to prevent muscle failure and sustain continuous muscle contractions. Your muscle cells undergo several interlinked phases to replenish the ATP storage (5):

ATP hydrolyzes and loses one of its three phosphates during explosive movements, releasing adenosine diphosphate (ADP) as a by-product (6).

When you ingest creatine supplements or your body creates it, the creatine binds with a phosphate molecule, forming creatine phosphate. Then during the regeneration phase, phosphocreatine -  a high-energy compound - breaks down to assist in the rapid regeneration by "lending" an immediate phosphate supply to help reform ATP. Therefore, phosphocreatine serves as a temporary buffer to help maintain ATP production (7).

Thus, creatine is one of the most popular supplements among bodybuilders and athletes to help them train for longer and greater intensities, boost muscle growth, and enhance strength (8).

These derivatives are manufactured in an attempt to improve the absorption of regular creatine while reducing the drawbacks of possible side effects. However, creatine monohydrate deems to provide the most benefits (9).

Creatine's reputation as one of the world's best legal and natural supplements regarding strength and muscle gain is well-earned!

Here is the full scope of benefits regarding creatine supplements:

An increase in ATP energy production is the primary benefit of creatine; the other benefits are merely a ripple effect of the ATP increase.

Most of the creatine pool in your body lies in the skeletal muscles, with approximately 65% being in a phosphorylated form of creatine (10). Therefore, consuming creatine supplements will increase the muscles' phosphocreatine stores that play a pivotal role in forming ATP by borrowing phosphates when needed (11).

ATP use during maximal intensity exercise tends to exhaust within one to three seconds of contraction onset without the proper means of resynthesizing ATP stores at an equally rapid rate.So, when the depletion of ATP restricts your muscles from performing at maximum intensity, creatine supplementation will boost ATP production, fuelling your muscles during muscle contractions or high-intensity exercises (12).

Research shows that consuming 5 g of creatine 4-6 times a day for several consecutive days can increase the total creatine concentration in the skeletal muscle by an average of 25 mmol/kg. The study also suggests that the creatine supplement increases the availability of both free creatine and phosphocreatine (13).

Creatine ingestion increases the ATP levels in your muscle tissue, maintaining the muscle peak torque production for longer due to increased phosphocreatine availability (15).

There is a strong indication that improved performance during exercise is associated with the increased phosphocreatine concentration in the muscle to synthesize ATP. Therefore, researchers suggest that a creatine supplement may improve exercise performance (10).

Creatine is an end product of contraction unique to muscle; it plays a pivotal role in controlling and stimulating muscle protein synthesis.

Creatine monohydrate can increase muscle performance in short-duration, high-intensity resistance exercises, as your muscles rely on the shuttle of phosphocreatine for adenosine triphosphate (17).

Creatine supplementation can increase fat-free mass and improve exercise performance.Research shows that training along with a creatine supplement can double your lean muscle gain and strength compared to exercise alone (18).

Creatine May Assist With Improving Endurance

A study on thirteen male cyclers indicates that creatine supplementation can decrease lactate concentrations during incremental cycling exercises while raising their lactate threshold. In addition, the study shows that total time to fatigue and maximum power output increases along with creatine consumption (21).

While creatine does not directly alter your glucose metabolism, it activates AMP-activated protein kinase (AMPK), an essential sensor of low ATP and a master of metabolism regulation. In response, the AMPK helps to keep cells functioning despite running low on fuel. More so, it shifts your basal glucose metabolism towards oxidation and reduces lactate production in your skeletal muscle cells (20).

Because lactic acid accumulation significantly contributes to muscle fatigue and failure, creatine supplements may improve endurance and enhance energy production in working muscles. An endurance performance study conducted on rats proved that creatine supplementation provided an increased ability to run farther; this demonstrates the possibility of improving endurance in athletes (22).

The beneficial effect of creatine upon skeletal muscle function appears to be applicable regardless of sex, fitness, and health status. However, studies with severely frail individuals and those older than 90 years remain scarce (23).

Therefore, the benefits afforded to older adults through creatine supplementation are substantial. It can improve quality of life and potentially reduce cognitive dysfunction. However, additional studies need to be done to prove these results.

A different study demonstrated that a creatine supplement of 8 g/day for five days can reduce mental fatigue in subjects who performed repeated mathematical calculations. In addition, the supplement reduced the task-evoked cerebral oxygenated hemoglobin increase in their brains, which is compatible with an increase in oxygen utilization in the brain (26).

Creatine is of the safest and most extensively studied supplements to date. However, there are one or two concerns regarding its use.

Creatine May Cause Water Retention

Water retention can occur when you consume creatine supplementation. Also known as fluid retention, creatine can cause water weight due to the tendency of the supplements to draw water into the muscles' cells (28).

When your muscles hold onto the excess water, it results in bloating and puffiness - your muscles may even appear more prominent in the first week of training.

A study on 13 soccer players was conducted to evaluate the changes in total body water in the athletes after seven days of creatine supplementation using a deuterium oxide dilution method and bioelectrical impedance formulas. The findings suggest that the supplement significantly increased the total body water (29).

Creatine May Cause Gastrointestinal Issues

Short-term creatine supplementation for 28 days should have zero detrimental effects on the gastrointestinal tract if you consume it in a recommended amount of 10 g/day in two equal 5 g doses. However, taking 10 g in a single serving may increase your risk of diarrhea (30).

A study investigating the varying effects of two creatine-supplementation protocols showed that ingesting creatine supplements in two 5-g doses and a single 10-g dose for 28 days have different adverse side effects. While both groups had gastrointestinal complaints of diarrhea, stomach upset, and belching, the latter group (single 10-g dose) had far greater percentages of these side effects (30).

Are Other Forms Of Creatine Better For Avoiding These Cons?

Various creatine derivatives like micronized creatine, creatine ethyl ester, and creatine hydrochloride claim to offer better solubility, improving absorption and reducing bloating and gastrointestinal issues. However, none of these alternatives have irrefutably proven this to be the case.

Although more research is necessary, there is promising research, including:

A study suggests that creatine hydrochloride is up to 38 times more soluble than regular creatine monohydrate (31).

Further research shows that when you place creatine is in a highly acidic state at pH 1.0. it increases absorption by 60%. These results occur due to increased permeability and enhanced solubility under acidic conditions, suggesting that creatine hydrochloride potentially offers an improved absorption compared to creatine (32).

Creatine monohydrate is naturally semi-lipophilic, so it inefficiently uses fat as a transport mechanism. However, through esterification, creatine ethyl ester improves the lipophilic abilities allowing it to use fat more efficiently and permeate your cell walls to exert an effect more quickly upon cellular function than its counterpart creatine monohydrate (33).

However, other research suggests that creatine ethyl ester does not benefit more than creatine monohydrate. In addition, although creatine ethyl ester supplementation may significantly increase serum creatinine levels, it did not effectively translate into increased muscle creatine content, suggesting that the supplement instead degrades in the gastrointestinal tract after ingestion (34).

Despite the claims about the adverse side effects of creatine monohydrate, creatine's poor reputation is a mere lack of understanding.

Creatine monohydrate is extensively studied and proven to be the most clinically effective creatine form regarding muscle uptake and improving high-intensity exercise capacity (35).

Creatine monohydrate supplements are safe and beneficial when taken within appropriate guidelines. In addition, no scientific evidence supports that the short- or long-term use of creatine monohydrate has any detrimental effects on healthy individuals (36).

The most common adverse effects include water retention and bloating in the early stages of supplementation.

Creatine supplementations appear to be the safest and most effective nutritional muscle mass, strength, and anaerobic enhancing supplements to date - it's not without great reason that creatine is a fundamental supplement in the fitness world.

While creatine monohydrate exhibits the most remarkable body of literature, it can cause bloating and gastrointestinal issues for some individuals. Fortunately, you can manage this issue by reducing the dosage. Note that creatine derivatives may help avoid these drawbacks, but more research is needed, especially in direct comparison with creatine monohydrate.