Types Of Creatine: What Are The Options?

Creatine is one of the most researched supplements. It can undoubtedly to improve fitness and athletic performance. Not all types of creatine are created equal. There are some differences between the various types of creatine. These differences are important to understand in order to get the best possible results with creatine. 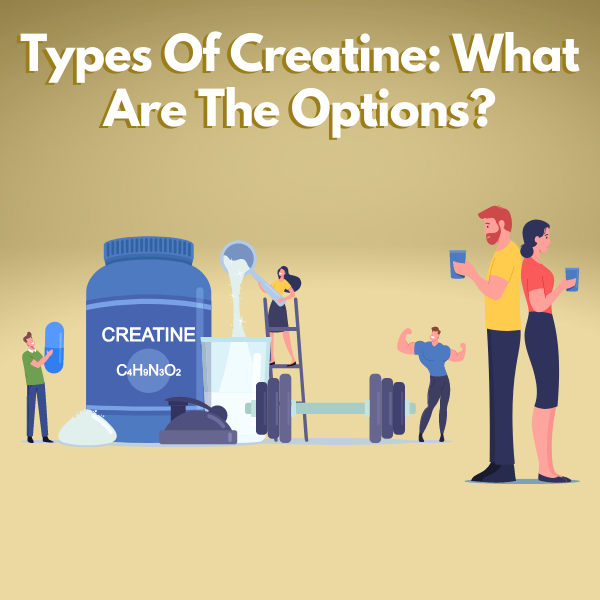 With up to eight varieties of this supplement, choosing the perfect one to suit your needs can become tricky. This article will review some of the fascinating and helpful research done on the eight most studied forms of creatine. So, dive in for the ins and outs of the different forms of creatine.

What Is Creatine And How Does It Work?

In short, creatine serves as a fundamental fuel source in your muscles, producing sufficient energy for fast-twitching muscle contractions, like during heavy lifting or high-intensity exercises. More so, it is an essential component in creating adenosine triphosphate (ATP)- the primary form of energy in your muscle cells (2).

Your muscles require ATP to function and power contractions. However, during strenuous muscle activity or high-intensity exercises, the limited supply of ATP quickly depletes, making the regeneration of ATP essential (3).

With adenine, a ribose sugar, and three bonded phosphate groups, ATP hydrolyzes and loses one of these phosphates while exercising to provide energy. In turn, it releases adenosine diphosphate (ADP) as a by-product (4).

Then, during the regeneration phase, the ADP “borrows” a phosphate from phosphocreatine (a phosphate ester of creatine), which helps replenish ATP levels by providing an immediate source of phosphates to help reform ATP. Therefore, phosphocreatine - the quickest form of regeneration - serves as a temporary buffer that helps maintain ATP production (5).

Lastly, creatine supplements can increase the phosphocreatine stores in your brain. In turn, improving brain health and combatting neurological diseases (7).

Now, for the good part - the different types of creatine supplements.

Creatine monohydrate is by far the most renowned form of creatine supplement worldwide. With over 2,000 studies conducted to date, it is one of the safest, most trustworthy, and effective legal performance-enhancing supplements on the market.

This world-renown supplement offers a multitude of benefits including, improved exercise performance and strength. In addition, creatine monohydrate tends to increase the water content in your muscles, leading to cell swelling and muscle growth. To date, close to 70% of studies report a significant improvement in the participants’ exercise capacity, while the other studies report non-significant performance gains (9).

Creatine monohydrate also increases the phosphocreatine concentration availability, improving high-intensity exercise performance and ATP synthesis (10). In addition, it is shown that creatine supplements selectively stimulate the rate of actin and myosin heavy chain synthesis - two major contractile proteins responsible for muscle movement and contractions - in your differentiating skeletal muscles. However, creatine generally only affects the rate of synthesis, not degradation (11).

Most research indicated that consuming creatine monohydrate as a supplement was deemed safe, and no severe side effects were reported other than minor cramps, bloating, and an upset tummy (14).

Creatine ethyl ester is a creatine monohydrate enriched with an ester - organic compounds formed by carboxylic acid and alcohols - attached to the molecule.

Esterification aims to increase creatine absorption while eliminating side effects of bloating and dehydration that some users complain of when using standard creatine monohydrate (15).

Creatine monohydrate is semi-lipophilic, meaning it inefficiently uses fat as a transport mechanism. However, through esterification, the lipophilic abilities improve. As a result, the esterified creatine uses fat more efficiently, allowing it to permeate your cell walls and exert an effect more quickly upon cellular function than its counterpart creatine monohydrate (16).

To summarize, not only will the dosage requirements of creatine ethyl ester be lower, but the absorption will be increased, reducing possible side effects of dehydration and bloating.

While some manufacturers claim that creatine ethyl ester has superior results to other forms of creatine, other evidence indicates that it’s worse at increasing creatine than creatine monohydrate. Even though creatine ethyl ester significantly increases serum creatine levels, it, unfortunately, does not translate into an increase in muscle creatine content. Instead, it degrades into the gastrointestinal tract after digestion (17).

Therefore, we do not recommend using creatine ethyl ester.

Initial excitement about the supplement was due to the creatine HCL’s superior solubility reports. Attaching hydrochloride instead of a water molecule enhances water solubility and absorption significantly (18). In addition, you’ll notice that creatine HCL almost instantly dissolves in water.

A study found that creatine HCL is up to 38 times more soluble than creatine monohydrate (19).

Further research showed that creatine placed in a highly acidic state with its pH stabilized at 1.0 increases absorption by 60%. These results are due to increased permeability and enhanced solubility under acidic conditions. Therefore, the study suggests that creatine HCL potentially offers an improved oral absorption compared to creatine (20).

Therefore, it’s possible to take smaller creatine HCL portions and experience matching results to creatine monohydrate as the creatine breaks down quicker for the muscles to absorb. In addition, faster absorption rates mean you’ll have little to no water retention or tummy issues, contrary to possible creatine monohydrate side effects (21).

One study where healthy, resistance-trained men consumed 4g of creatine HCL for seven days showed that these men had significant increases in repetitions performed during intermittent bouts of bench press, vertical jump exercises, and body weight (22).

Supposedly, buffering the creatine will increase its potency and reduce the side effects of bloating and abdominal cramps. However, a study that directly compared Kre-Alkalyn to creatine monohydrate found no differences regarding effectiveness and side effects (23).

Kre-Alkalyn does not encourage larger volumes of creatine content available in skeletal muscles, and it does not promote better body composition, strength, anaerobic capacity results than creatine monohydrate. So, due to insufficient evidence of the unique advantages that buffered creatine provides, creatine monohydrate is the winner (24).

While most creatine supplements are manufactured and sold in powdered form, some liquid, ready-to-drink versions exist where manufacturers have already dissolved creatine monohydrate in water.

The liquid counterpart is rumored to offer immediate benefits to the body after taking the supplement as it reaches the muscles sooner, enabling them to absorb the creatine at once. In addition, professional marketers claim that liquid creatine allows the consumer to experience changes from as early as day one.

However, most of these claims are generally scientifically unfounded and have no evidence to support them. For example, scientific research has proven for years that all creatine supplements need time to be adequately absorbed by the body; claiming that liquid creatine is immediately available to the muscles is entirely untrue (6).

Liquid creatine has several drawbacks to its powdered counterpart. First, liquid creatine is highly unstable, meaning that it can downgrade into creatinine, a substance pretty useless for the body (25).

Research suggests mixing the powdered form of creatine monohydrate right before using it to ensure optimal effectivity and prevent the creatine from turning into creatinine (27).

Micronized creatine is essentially a standard creatine monohydrate that has been divided into particles up to twenty times smaller than its counterpart.

The primary purpose behind micronized creatine is to increase absorption while reducing gastrointestinal issues and bloating. However, there isn’t any scientific data that supports these claims on how well the body absorbs micronized creatine.

Creatine magnesium chelate is a form of the creatine supplement that’s “chelated” with magnesium. In simpler terms, it’s a creatine molecule with magnesium attached to it; and the word chelate means to create a ring-like complex or to “grab and bond.”

Creatine citrate is a product of creatine combined with organic citric acid salts from citrus fruits.

Citrate supplements increase performance in short-circuit, intense exercise that lasts around two to fifty minutes - a duration long enough for the aerobic metabolism activation to become essential. However, no conclusive evidence supports that citrate supplements can increase endurance exercise capacity (29).

Creatine gluconate is a reasonably new creatine type in which a creatine molecule is synthetically bound to gluconic acid, an oxidized glucose molecule common in nature (fruit, honey, and wine).

The prosed benefit of creatine gluconate is that it’s more soluble than standard creatine monohydrate due to the higher solubility potential of gluconic acid.

While creatine monohydrate is notorious for leaving an unpleasant sandy texture when you mix in water, the increased solubility of creatine gluconate not only improves the palatability but hopefully supports improved absorption into the skeletal muscles.

In theory, gluconic acid is derived from glucose, so it should help improve creatine absorption through the intestines and into the muscles as its intestinal absorption is similar to regular glucose. However, no relevant studies or research verify this theory to date (31).

Safety of Other Forms of Creatine

It’s critical to note that while extensive research backs the effectiveness and safety of creatine monohydrate, there is limited data available confirming the same results for the other types of creatine supplements (32).

The most common side effects of creatine monohydrate include transient water retention during the early phases of supplement introduction (32).

Although research supports and confirms creatine monohydrate as an effective nutritional supplement to improve performance, strength, and endurance, you should instead try other forms of creatine if you experience adverse digestive problems like stomach cramps and bloating.

Conclusion: Which Type Of Creatine Supplement Should You Use?

While many new types of creatine supplements seem promising regarding similar benefits to creatine monohydrate but with better absorption, more research is needed to determine the superiority and safety of these alternatives.

Until then, remember that creatine monohydrate has undergone extensive research and is deemed to be an excellent supplement to boost your sporting and fitness performance.