No, pea protein powder is not bad for autoimmune diseases, when taken correctly. But, if you suffer from type-one diabetes it is important to check the level of sugar and artificial sweeteners used in any protein powder you take. If you have any concerns you should speak to a medical professional. 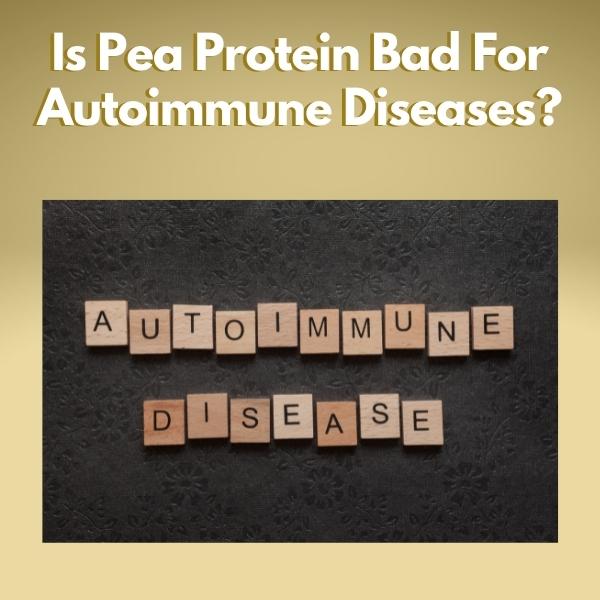 Sadly, there are a number of different types of autoimmune disease which people suffer from. Whether pea protein is beneficial to those suffering with autoimmune issues is an interesting topic which needs further research.

However, there is evidence to show the addition of pea protein to the diets of those suffering with an autoimmunity disease can be beneficial. One of the reasons for this is the many health benefits provided by pea protein. Protein powders are a convenient way individuals can incorporate pea protein into their diet. Additionally, a study into the anti-inflammatory qualities of pea protein found it can increase intestinal short-chain fatty acids (SCFA) levels, which are considered anti-inflammatory (1).

What Are Autoimmunity Diseases?

The autoimmune diseases are a set of medical conditions which vary in severity from being a nuisance to being life-threatening (2). The more known autoimmune diseases are; rheumatic arthritis, celiac disease, type one diabetes and multiple sclerosis. Autoimmune reactions reflect an imbalance between effector and regulatory immune responses, with studies showing a link between both the patients genetic background and environmental factors (3).

The term autoimmunity disease covers a wide range of different medical conditions, but the term autoimmunity refers to the process behind inflammatory diseases (4). The function of the immune system is to protect the body from any foreign bodies. When the autoimmunity system becomes unsettled or confused it can auto-react. This reaction causes it to attack itself and leads to autoimmunity flare-ups. This process will continue until the body believes it has reestablished the normal balance between effector and regulatory immune responses (3).

At times, the autoimmunity system is effective at controlling inflammation. However sometimes it is not. This is why autoimmune diseases sufferers often reporting their symptoms to come in waves. A good example of this would be arthritis, which may flare up for weeks at a time, before settling down suddenly. When this happens the individual suffering from the arthritis is unable to pinpoint a specific cause which triggered the flare up.

Much discussion is placed around both these diseases with the umbrella term IBD, also known as inflammatory bowel disease, being used. The debate occurs because there is still an uncertainty about whether this can be classed as a true autoimmunity disease (2). It is also sometimes appropriate for suffers of Crohn’s disease to follow the FODMAP diet. The FODMAP is a diet, which originated from Australia and provides a guide of which foods to eat and which to avoid. Following the FODMAP diet should keep inflammation settled in individuals who suffer from Crohn’s.

Whilst autoimmunity diseases are linked to the gut microbiome it is now perceived to be initiated by dysregulated and exaggerated immune responses to intestinal microbes oppose to it being a direct attack on a particular cell (2).

There is research to show the autoimmunity diseases: multiple sclerosis, lupus and type one diabetes run in families. Research has found a strong familial associations to these diseases with an odds ratio ranging from 5 to 10 (7). Whilst every family member will not inherit the same disease they will inherit the predisposition to have an autoimmune disorder.

A 2012 study found the overall estimated prevalence of autoimmunity diseases in the population is approximately 4.5%. With this being broken down into 2.7% for males and 6.4% for females (8). In addition to this the study identified 81 autoimmunity diseases. Further research has discovered certain ethnic groups are more likely to develop autoimmunity diseases. For example, the rate of autoimmune diseases in African-American’s and Native Americans is higher than the rate found in Caucasians (9). Additionally, some autoimmune diseases are more common in particular ethnic groups. For example, lupus affects more African-American and Hispanic people than Caucasians.

A further study discovered leaky gut disease may allow environmental factors to enter the body and trigger the initiation and development of autoimmune disorders (10). There is also a theory which suggests the ‘western diet’ is a potential trigger for autoimmune disease. This is based on research which shows a lot of the western population consume large quantities of high-fat, high sugar, and processed foods, which are known to trigger inflammation (11 ,12). This inflammation could set off an immune system response. However, more research needs to be carried out in order to confirm if there is a link between the 'western diet' and autoimmune diseases.

How Could Pea Protein Powders Help Those Who Suffer From IBD?

The term IBD encompasses both Crohn’s disease and ulcerative disease. There has been a lot of research into the health benefits of consuming pea protein powder. Some of these benefits can help those who suffer with IBD. The consumption of pea protein powders helps increase daily protein intake. This is especially important if an individuals is not hitting their recommended daily protein intake. Protein is an important macronutrient needed to restore cells, and to grown and repair, muscles tissues, skin, bones, organs, hair and nails (13).

The pea protein amino acid profile is good. It contains all nine essential amino acids (but has low methionine levels, this leads to different opinions whether pea can be referred to as a complete protein). Pea protein also contains good levels of the branched chain amino acids: leucine, isoleucine and valine. These amino acids play critical roles in the regulation of energy homeostasis, nutrition metabolism, gut health, immunity and disease (14). Perhaps the key finding of this research in relation to IBD is pea protein powder's ability to help gut health. Recent research has discovered pea protein has the ability to increase intestinal SCFA levels, which are considered anti-inflammatory and important for maintenance of the mucosal barrier (15).

With further scientific findings show by modulating the gut microbiota there is potential to regulate intestinal permeability and this in turn could then alter the course of autoimmune diseases in susceptible individuals (2). Another study went on to suggest peptides from yellow pea protein could be used as an alternative therapy for the prevention of inflammatory-related diseases (16).

Can Pea Protein Help Those Who Suffer From Pernicious Anaemia?

The autoimmune disorder pernicious anaemia effects the body’s ability to absorb and effectively digest the iron in patient’s diets (19). In addition to this, the small intestine struggles to absorb B-12 from the diet. Fortified pea protein powders contain B12 as well as being rich in iron. Taking a pea protein powder can help individuals who suffer with pernicious anaemia elevate both their B-12 and iron levels. 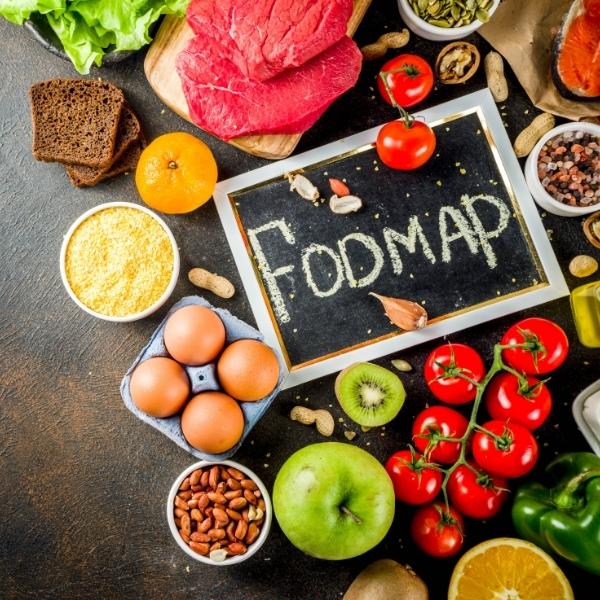 Can Pea Protein Powder Help Those Who Suffer From Celiac Disease?

When someone who suffers from celiac disease consumes gluten their immune system's reaction which causes damage to the small intestine and weakens its ability to digest food. Side effects of this reaction include rashes, joint pain and fatigue (20).

Pea protein powder is hypo-allergenic and free from the 8 main types of allergens (6). This makes it a great choice of protein powder for anyone with food sensitivities, such as celiac disease. Additionally, pea protein powder being, rich in iron (and B12 if it is fortified) should help with symptoms of fatigue, following a reaction.

Pea Protein Is Not Bad For Autoimmune Disorders

1) It is contains all nine essential amino acids (although low in methionine).

3) It is a hypoallergenic protein powder.

4) It is a protein powder rich in iron.

Those who suffer from type one diabetes are advised to check the labelling of any protein powders they are thinking of taking. This is to ensure the levels of sugar and artificial sweeteners added to the supplement. If you have any autoimmunity disorder and are unsure about taking pea protein powder it is recommended you consult with a medical professional. 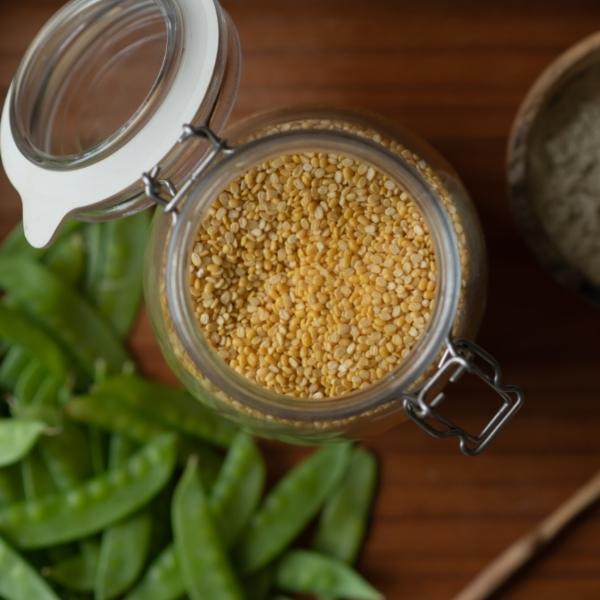 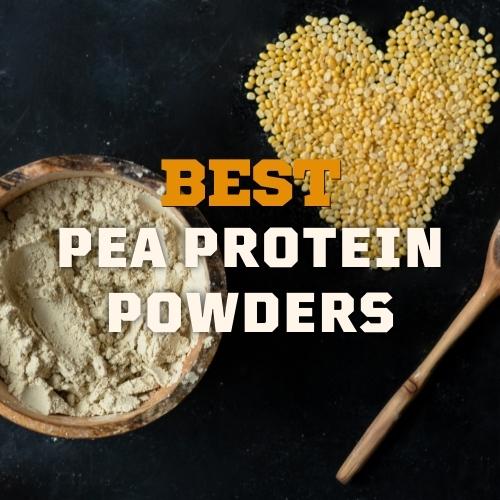